On Sunday I spoke on Katie Perrior’s show on TalkRADIO about the ease or otherwise of moving to WTO rules. I enjoyed the chat – even if she did call me an economist. How dare she! Here’s the audio, and here are more thoughts on the matter for those who prefer to read rather than listen.

I wasn’t able to vote on Brexit because I was a Brit living overseas. Just like David Cameron, I never imagined the vote would turn out as it did. I assumed, as he did, it was a way of diverting attention away from UKIP and help the Tories to regain some votes.

But now I look back at it, the outcome should have seemed inevitable.  It can all be neatly summed up in this chart, shared by former Brexit secretary Dominic Raab last week. 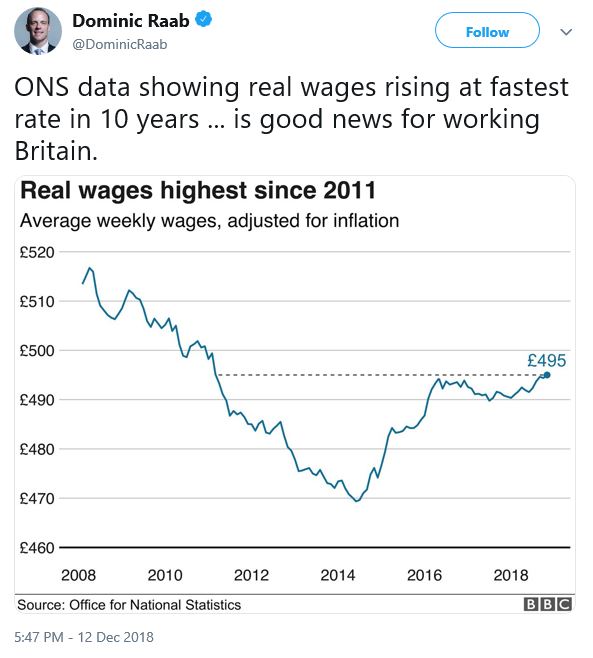 Since 2008 (actually long before), real wages in the UK had been falling a lot. At the same time, European migration was high. It’s inevitable that low income earners would tie the two together. Wages were down, they assumed, not because of the state of the economy, or a government austerity drive, it was Johnny Foreigner taking all the jobs. Incidentally, you’ll notice that, despite Mr Raab’s spurious claim that wages are growing, the Brexit vote appears to have stalled a recovery in real wages. So, it has made matters worse, even before we leave.

To throw oil onto the fire of those already reeling from workers taking jobs, our view of the EU is Jean Claude Juncker, pissed and privileged, living off our significant contributions. The day before the vote he made a point of declaring that Britain had got as much as it was going to get out of the EU. It was a rallying cry for the Brexit ranks as they went out to vote. To this day, he continues to be an embarrassment, much like a drunken uncle at a wedding. One thing Boris Johnson was right on, was calling this man an “unelected tin-pot figure” – although he is, of course, elected by MEPs that we vote for and not everyone in the EU is happy with the process.

May’s backstop deal will never become reality and her determination to see it through is bad news for the UK.

First off, it’s been badly sold. Many people seem to have confused the Withdrawal Agreement with the final deal. They’d be even more shocked to discover the truth, that the final deal is currently only 27 pages long – the interim arrangement, which we’re assured we’ll never need, runs well over 500 pages. The big one is a complex legal arrangement, the other, on which our future depends, is a fluff piece.

So, we leave at the end of March on the assumption that the fluff piece will turn into something solid, that answers all our concerns. Of course, there’s no hope in hell we’ll ever reach an agreement that satisfies everyone. To ensure an open border, for example, we really need to stay in the customs union, or something similar. That means being beholden to the EU without any say. Bad outcome.

The backstop was designed to keep things going until we arrived at a deal. But as no deal is ever likely to be reached, based on the experience of the last two years, the backstop option will, almost certainly, be there forever.  The Hotel California scenario.  It’s hard to agree to go blindly down a path, without knowing the destination, with the threat the path is never ending.

‘Norway’ is a bad deal

The Norway option is no better. It looks appealing because, whenever it is discussed in the press, it is normally illustrated with a picture of a Norwegian fjord, with blue skies over lush green moutainsides, running down to crystal clear waters. I can see the instant appeal for a Brexiteer living in Uttoxeter or Doncaster. But the Norway option sees us part of the European Economic Area, which allows us to trade with the EU, but accepting most EU rules, and freedom of movement. We can determine which rules to adopt, but only if all EEA members agree, which would make the UK answerable to Lichtenstein, a principality of just 38,000 people. That would be like deolvuting the powers of Westminster to Billericay council and us all living with the consequences.

No-deal will be a disaster

An increasing number of Brexiteers now seem adamant that a no-deal Brexit is the way forward. In other words, we leave in a few months, and revert to WTO rules. They’ll be alright, because whatever they are smoking to reach that conclusion, will detach them from the harsh reality of what happens next.

Let’s ignore the Irish border consequences, because Brexiteers have an answer for that. There’ll be some electronic solution we can pick up at Maplin the weekend before.

Instead, lets consider what it would be like to be on the doorstep of the world’s largest trading block, and all the protectionist policies that entails.

The EU charges tariffs on a wide range of goods. With no deal, we’d be paying those tariffs on many of the goods we currently sell to them. In effect, it would meet a significant portion of money paid by the government in EU membership, will switch to the private sector to pay.

Cars account for 12 percent of our total exports and half of those go to Europe. Are Nissan and Toyota really going to ramp up production in the UK if cars made here face import fees into Europe – or will they move their factories to continental Europe? We haven’t seen the immediate impact yet because manufacturing doesn’t shift that quickly, but you can safely assume that, as plants bid for new projects, the UK will be severely disadvantaged.

We already have trade deals

Unshackled from the EU, the UK will be free to explore new trade opportunities that it’s been held back from developing. This sham argument has been with us since the start of the Brexit journey.

Whoever we try and do a deal with, the EU will almost certainly have got their first. They already have 37 trade deals in place and its negotiating others with the US, Canada, India and China – plus more than a dozen others.

But, we can count on Australia and New Zealand. That’s a good start — if we believe in foregoing an existing free trade agreement with a block of half a billion people, 30 miles over the channel, for one with 30 million people 11 thousand miles away.

Meanwhile, we will spend an age trying to recreate the trade deals we already have, through our EU membership. Boris Johnson talks about Europe’s falling share of world trade and points to how our own trade is growing outside Europe, pointing to Korea as an example. And what a magnificent example it is. Our exports there have doubled, to £6bn, now accounting for 0.8 percent of our total exports. Fantastic. 0.8 percent! And what helped us get there? Through the EU’s free trade deal with Korea, that we’ll no longer be part of should we leave the EU at the end of March.

By the way – our trade with Europe isn’t falling. Europe’s total trade isn’t falling. Its just that other parts of the world are growing faster. Like China, for example. Strange that Australia is mentioned before China as a future trading partner. Perhaps its because they look like us and speak English, after a fashion.

There’s another, often repeated, assumption that we can simply rewrite EU trade deals for the UK. In other words, now Japan has agreed to a trade deal with the EU, we just need to ‘find and replace’ in the word document, to develop a Japan UK trade deal.

Liam Fox obviously thinks so. He is our Secretary of State for International Trade, who tweeted this week what good news the EU-Japan economic partnership is for us. It could boost UK GDP by up to £3bn in the long run. How so, when we are about to leave one half of that partnership?

Let’s look at agriculture, which is a significant part of this new deal. Currently Japan imports US$57 billion in agricultural products from the EU each year. Before this deal, Japan inflicted hefty tariffs on much of that product – 38.5 percent on beef, for example. Our farmers won’t be charged that in February, when this new deal kicks in, but they’ll be back paying it again two months later. The current level playing field will be tilted heavily towards Europe, and Dr Fox thinks this is good for UK business?

Trade deals often insist that a proportion of an exported product is from the originating country. If we sell cars, for example, we need to show that 40 percent is made in Britain.  That could be problematic. The production process sees car parts made across Europe – will we meet the 40 percent quota, for lots of products, when it comes to making deals. It’ll be much easier for our European cousins, for whom the 40 percent rule can be spread across 27 countries.

This rule of origin puts at risk products we make with imported parts from the EU. Half of our physical exports – that’s £190b a year – are finished manufactured goods. What proportion of those are actually made in the EU – let’s hope less than 40 percent, otherwise settling new trade deals will become problematic.

This rule is also a concern for the components we make for products constructed in the EU. They’ll want to source components within the EU to meet the 40 percent rule, rather than buying from us. We lose out because of their trade deal.

It seems the more trade deals the EU does, the more it’ll hurt is. Notwithstanding the lost opportunity of being included in those deals, had we decided to stay as part of the EU.

We’ll pay for our pig-headedness

Bad though a no-deal Brexit is, it’s increasingly looking like the most likely outcome. The Prime Minister is flatly refusing another referendum and, even if she did, there’s no guarantee people won’t make the same mistake again. All it takes is another video of Jean Claude Juncker, looking pissed, flicking a woman’s hair as though she was his personal plaything. 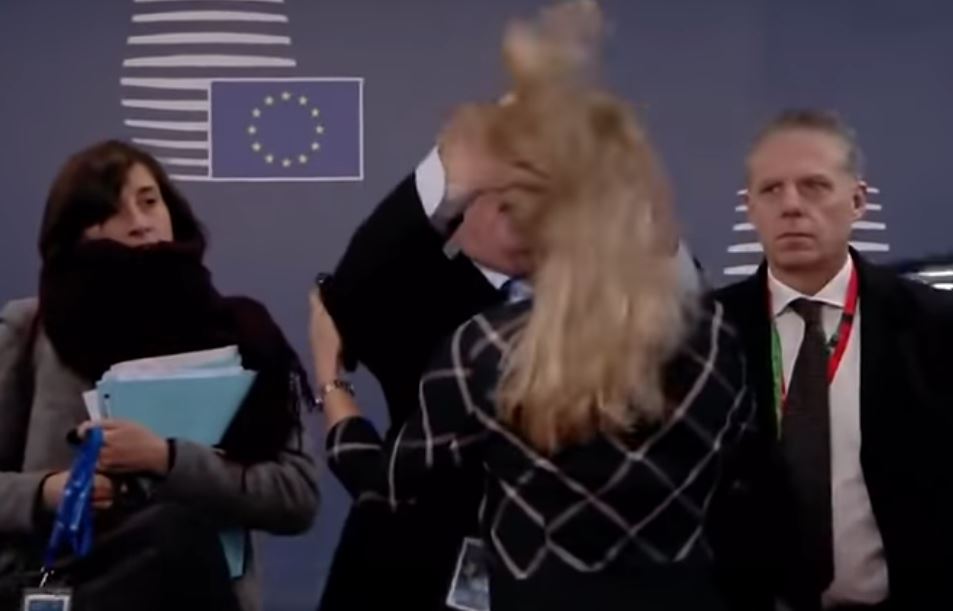 May’s backstop is the worst of all possible worlds. Membership we can never leave, with no say on the future and no ability to tie up trade agreements if we don’t make the rules.

If the imposition of tariffs sees us lose, say 10% of that trade, that makes Brexit a £17 billion cost to Britain. That’s remarkably close to the £350m that the Brexit bus promised each week for the NHS. All because some people think Europeans are taking our jobs and because Jean Claude Juncker is (seemingly) a pisspot.

British arrogance has reached dizzying new heights and we’re about to see the price of it.

As the govt penalise universities that do not focus on vocational degrees, worth noting that Boris studied 'Literae Humaniores'. A less job ready degree it would be hard to find.

A downgrade to inflation expectations on Friday gave market sentiment a boost. NAB’s Ray Attrill says it’s been taken as a sign that central banks might have to do less to soften demand and a reduced fear in recession risk. https://t.co/4xdqefB3O0

Reply on TwitterRetweet on TwitterLike on Twitter2Twitter
Load More...