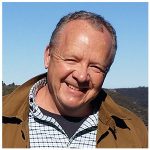 Here are a few career highlights:

Yes, Phil can write as well as talk. He’s written hundreds of articles for CBS, as well as the occasional piece for specialist publications that interest him. There’s even a novel with his name on it, although he’d be the first to suggest you put it towards the bottom of your reading list.

At 14 he got his National Cycling Proficiency Certificate. He has been involved in the creation of two human beings. He irons his own clothes.

No bounce in equity indices today, says NAB’s Taylor Nugent. It’s all down to growing concerns about a US economic slowdown. Like Cisco’s profit downgrade, for example. Plus the lowdown on yesterday’s Aussie employment numbers. https://t.co/aGBhCkChFv

Reply on TwitterRetweet on TwitterLike on TwitterTwitter
Load More...